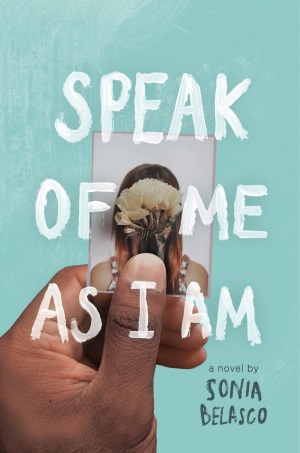 Speak of Me as I Am by Sonia Belasco

Synopsis: A moving story of grief, honesty, and the healing power of art—the ties that bind us together, even when those we love are gone.

Melanie and Damon are both living in the shadow of loss. For Melanie, it’s the loss of her larger-than-life artist mother, taken by cancer well before her time. For Damon, it’s the loss of his best friend, Carlos, who took his own life.

As they struggle to fill the empty spaces their loved ones left behind, fate conspires to bring them together. Damon takes pictures with Carlos’s camera to try to understand his choices, and Melanie begins painting as a way of feeling closer to her mother. But when the two join their school’s production of Othello, the play they both hoped would be a distraction becomes a test of who they truly are, both together and on their own. And more than anything else, they discover that it just might be possible to live their lives without completely letting go of their sadness.

Thank you, Philomel Books, for my advanced review copy of Speak of Me as I Am. I received this ARC in exchange for an honest review; this does not affect my opinion. Any quotes mentioned below are taken from the ARC and are subject to change upon publication.

Be aware that Speak of Me as I Am deals with death, cancer, suicide and has some offensive language. All of this is discussed down below in my review. There will be spoilers in this review so consider yourself warned.

Speak of Me as I Am is a story about two teenagers, Melanie and Damon, who have both dealt with an immense loss but in different ways. The story made me cry and there were several scenes I enjoyed, in the moment, however, there is a lot about this book that bothered me. I see what this story is trying to do. It wants to show us how grief is something we just have to live with and how there are so many different ways we experience it and are faced with it. I really wanted to love this book, but it fell short in so many ways and was even hurtful at times instead.

The story is about Melanie who lost her mother to cancer and Damon who lost his best friend to suicide. Damon is a black teen who we see throughout the book dealing with the loss of Carlos, who is Salvadoran and his best friend. Carlos was a photographer and left all of his photos and his camera behind, and with those Damon clings to his memory and the feelings he carries around with him regarding Carlos’ suicide. Throughout the book, we find out about Carlos’ hard home life but despite this, the reader gets a feeling there is something we don’t know about Carlos’ death yet. What we towards the end of the book find out is something Damon himself first releases after Carlos’ death. Carlos was in love with Damon, which was very clear in the photographs Carlos left behind.

“He was a master at that, at avoiding getting too deep. He could be evasive as hell. But it was all so clear in those photos, all these pictures he took of me but never showed me.”

I wait, but he doesn’t say anything. His hands are shaking. “What, Damon?” I ask. “What was so clear?”

Damon takes in a deep breath and lets it go all at once. “The way he looked at me,” he says.

To me, the story reads as if Carlos killed himself because he was in love with a man, his best friend Damon, and it very much falls into the “bury your gays” trope. The fact that Carlos was gay (or bisexual, his sexuality was never defined) felt very much like a plot device and like it only existed to make the main character Damon feel ashamed that he didn’t know and support his best friend sooner, despite him not feeling the same way. The way Carlos’ sexuality was used felt cheap because it only served as a way to give the main character meaning to his suicide and I think it could have been dealt with in a lot of other better ways and still convey the story’s main message.

However, we have another character in the story that also plays a large part and that is Tristan. Tristan has been Melanie’s best friend since they were kids, and he is gay. At the beginning of the story I was scared he would fall into the gay best friend trope, however, I did feel that his character got its own subplot and his character was fleshed out which is why I think he becomes much more than just the best friend. Nonetheless, I had issues with his subplot. During the course of the book Tristan’s rich and political parents find out he’s gay and their reaction is to send him to a therapist that is a family friend in the hopes to “cure” him. They force him to go by forbidding him to be a part of the school play unless he meets with this therapist. This is not okay, you cannot cure homosexuality and to even see it suggested in YA book is saddening.

A few other things I had a problem within Speak of Me as I Am was the fact that the black characters’ skin was described using food comparisons, for example, in the book we see one character described as he “has his mother’s dark, almond-shaped eyes and father’s espresso skin” and our main character Damon is described by the other main character Melanie like “His skin’s the color of latte, with dark, wiry hair and eyes so green they’d make Kermit jealous.”

Another instant that bothers me was how the main character Damon was supposed to be understanding and accepting, yet used the fa-word (a homophobic slur) in a conversation with his cousin who thinks theater is gay. Down below are two quotes that I thought were offensive and that involve this homophobic slur (trigger warning for the fa-word).

“No, actually,” I say. “I don’t think it’s particularly homosexual that I’m participating in the play.”

“All the theater kids are straight-up fags,” Jackson states.

“Oh, really,” I say, leaning forward in my seat. “How do you know this, Jackson? You spend a lot of time hanging with the theater kids?”

Prague looks down at his shoes, shoulders slumping. “It ain’t like that, D, we were just being—”

“Ignorant, right,” I say. “Because that makes it better. What’re you afraid of, Prague? That you’re gonna catch the faggot bug?”

First of all, when you call someone out on the page for their homophobic and ignorant statements you don’t actually imply or insinuate that they are gay too and if you are so accepting yourself you should never use the fa-word to describe a gay person even if you say it with sarcasm. You cannot show how offensive a word is by using it yourself.

The book also showed ableism which is seen in the following quote,

“I give him this pathetic little half wave in return, a scrunching of my fingers that probably makes me look like I’m physically disabled.”

Verdict: This book is offensive in more ways than one, and I would seriously advise you to read it with caution, if at all. This book has a lot of elements that can be hurtful to marginalized readers and I hope my review has shed some light on why that is. All of my quotes and conclusions come from the ARC provided to me. There may be differences between the ARC and the final version.