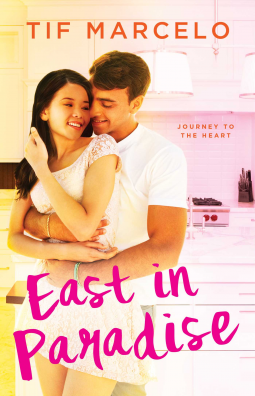 East in Paradise by Tif Marcelo

Synopsis: When an entrepreneur and an Army reservist end up in their own reality show fauxmance, they have to decide whether their love exists just for the cameras…or if it’s for real in this warmhearted romance, perfect for foodies and wine lovers!

Bryn Aquino, the former manager of a Filipino restaurant, knows the value of hard work. With a shiny new MBA in tow and an investor, she’s ready to start her own business: a culinary retreat where visitors can relax, cook, and enjoy life’s simple pleasures. Dubbed Paraiso Retreats, she leases the childhood home of army reservist Mitchell Dunford—who returned from Afghanistan to revive his family’s vineyard—but finds herself in a bind when her investor pulls out of the business.

When the retreat catches an internet live stream producer’s eye through social media channels, Bryn is offered the opportunity of a lifetime—to document her journey in exchange for a hefty paycheck. Excited, Bryn happily agrees to the arrangement…only to find out that she’s going to have to fake an onscreen romance with her indifferent landlord in order to keep her audience interested.

As Mitchell and Bryn put on a show for the cameras, they find their romance isn’t hard to fake. They’ve got more in common under their bluster, banter, and doubts. As their relationship heats up and the cameras keep rolling, the line between show and reality blurs. And when the pressures of family, business, and the audience stack against them, will their romance survive internet stardom? Or was it just for show?

Thank you, Tif Marcelo and Pocket Star, for my ARC of East in Paradise. I received this ARC in exchange for an honest review; this does not affect my opinion. Any quotes mentioned below are taken from the ARC and are subject to change upon publication.

East in Paradise is the standalone sequel to North to You. The book follows Bryn Aquino, a Filipino businesswoman, and Mitchell Dunford, army hero, and an expert in all things agriculture and vineyards. East in Paradise takes you on a journey where you are swept away by reality TV, fake dating, delicious food and wine, raw emotions and lots of laughs. If foodie romances, as well as strong and vulnerable heroes and heroines, are your thing, then your next book purchase should be none other than East in Paradise by Tif Marcelo.

This attraction is a conflict of interest, and all wrong. But the electricity between us–it’s palpable. It has both a negative and a positive charge that draws me to him and pushes me away, though equally powerful. And I know he feels it, too.

I love how sweet the romance between Bryn and Mitchell is, their banter is A+ and they really have to work to get their happily ever after. They both have walls that need to be torn down and I loved to see that happen little by little. The end result was that much sweeter because of the hard work and ups and downs Bryn and Mitchell had to get through to get their happy ending. This book has both fake dating and reality TV and I love these tropes so much. Moreover, I love how the story is about more than just the romance between Bryn and Mitchell. Both of them are also trying to start businesses and that’s a whole process, and I like how we get to see that. There is a lot riding on the success of their businesses and we get to see them on every step of the way: the good and the bad, the rewards and the setbacks.

Damn, the woman won’t stop. Her attitude won’t quit; she refuses to submit.
And it fucking turns me on.

Bryn is a remarkable heroine, I love her so much. She is energetic, and always wants to fight and have the last word in discussions and arguments. I’m so glad she was portrayed the way she was because I think it’s rare to see headstrong and opinionated women get celebrated. I relate to her so much, so definitely give me more gutsy, vulnerable and stubborn women in romance. I love it when we see women going after what they want and not being afraid to do it. Furthermore, what I love about Mitchell is the fact that he’s kind, is in love with all things nature, and totally has a green thumb. There is also the fact that he’s a soldier, a captain. Mitchell has PTSD and I loved the way that was shown and handled. We see how he deals with both his anxiety and insomnia and how he gets treatment for his PTSD as his symptoms begin to worsen. I love how this book called out a lot of the stigma that exists surrounding soldiers with PTSD and I’m glad something so significant was brought up in a skillful way that in no way diminishes its importance. Mitchell and Bryn are both fully fleshed out characters that I think many will enjoy reading about and getting to know them.

Another aspect of East in Paradise I loved was the family vibes. We get to see both Bryn’s and Mitchell’s family, and despite none of them being perfect, I love how authentic it feels to see them come with their two cents about the entire ordeal of the plot. It’s also very clear how much Bryn and Mitchell care about their families and thus also care about what the other’s family thinks of them. Another plus was the main characters Camille and Drew from North to You made multiple cameo appearances (which was not surprising considering we were introduced to Bryn in North to You since she’s Drew’s cousin). As for future installments, the information about who the third book is about is still unknown. However, I’d really like to see the next book be about Victoria (Bryn’s sister) or Cody (Mitchell’s brother) since I fell in love with them both from what we saw in East in Paradise.

All in all, I love how Tif Marcelo has brought us two amazing foodie romances that will make you swoon. East in Paradise has the best romance and an amazing cast of characters to get invested in. I love how this book is both light and funny yet still manages to tackle important topics that I can imagine are often just brushed over. If you’re a lover of romance, food, wine and that classic “and they lived happily ever after” then you need East in Paradise on your TBR. Nothing beats a really good romance read and this book is definitely it.

Today's my birthday so I'm celebrating with relaxing time and lots of other amazing things. I also got the cutest Hermione funko pop, which I'll show you later this week ❤️
This book, Amour Amour by Krista & Becca Ritchie, is one of my all time favorites. It's about family, love and fighting for your dreams. It's a really inspirational read. The second book, Infini, is coming out early 2017 and I'm really excited about it. Krista and Becca never fail to surprise me and make me fall in love with their characters! ✨
Under The Lights by Dahlia Adler is one of my most anticipated reads ever. I mean I love Hollywood and movies, so of course it is. Right now I'm pretty busy with school though, but soon I shall read lots and lots again!
The End of Everything is a book I got on a whim while I was in Amsterdam this summer with my friend Amy. I'm not sure what it's about really, the synopsis is very mysterious, but I'm excited to find out. Do you guys have huge TBR piles? I feel like mine never ends!
What book are you currently reading? I'm about to start Thanks a Lot, John LeClair and I can't wait. It's the cutest. You guys should add it to your TBR, it comes out in December.
Back to top
%d bloggers like this: